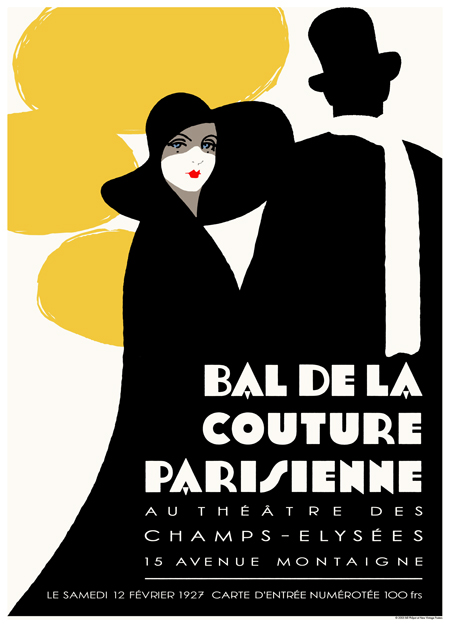 I love this poster. I got a real kick out of producing it, and it was one that, as an illustration, just fell nicely into place. The lines and the composition flowed beautifully in the original sketch. I am not for one moment (Heaven forbid!) suggesting that this process was easy, as there was a great deal of research went in before committing to the design. But once the concept was developed the image almost designed itself. The viewer’s eye is drawn to the girl’s face (whose gaze follows you around the room) and then it circles that area for a while following the line of the hat before being led down to the text by the broad line of the gentleman’s white scarf. The girl is clearly the star of the show and the silhouetted figure of the gentleman is very much in a supporting role. I am also pleased with the fact that there is something a little enigmatic in the expression on the girl’s face. We cannot quite tell if she is happy to be on the arm of the doubtless wealthy but shadowy gentleman. Is that expression one of comfortable contentment or is it perhaps a trifle uneasy? 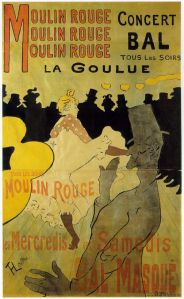 poster from 1891 of the dancer La Goulue at the Moulin Rouge, shown on the right. (“If you’re going to steal, steal from the best.” Who said that, I wonder?) ‘La Goulue’ (meaning, would you believe, ‘The Glutton’, real name Louise Weber) was the most famous quadrille dancer of her day and a regular performer at The Moulin Rouge, The Moulin de la Galette and other famous Parisian venues of the time, with her dancing partner Valentin-le-Décossé (seen in the foreground).

I did experiment with many different type designs before I felt that I had got it right, but I just knew when it was. The lettering is a hand drawn, original font, unique to me, although based on exsisting type styles of the period.

The text is taken from an original Bal De La Couture poster of 1925, (shown below) designed by Georges Lepape two years earlier than the date featured in my design, so the details are correct. Note the price of admission: 100 francs. It’s my guess that in 1927 100 francs was a great deal of money, so the ticket price must have pretty much guaranteed to the guests that they were unlikely to be rubbing shoulders with any of the Parisian riff-raff once they stepped inside the Theatre des Champs-Elysees. 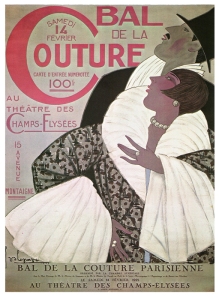 The magnificent art deco structure of the Theatre des Champs-Elysees in the 8th arrondissement of Paris, opened in 1913 as a venue for contemporary music, dance and opera, in contrast to the more conservative Paris Opera. In its first season it hosted the Ballet Russes, staging the world premiere of Stravinsky’s Rite Of Spring on May 29th, an event which became notorious for the ensuing riot amongst the audience.

A revival of the fashion ball has, in the last twenty years, been combined with the tradition of the debutants ball by Ophélie Renouard as Le Bal des Débutantes, in which the daughters of former celebrities, aristocrats, artists, politicians and others are dressed by haute couture and couture fashion houses in order to promote their reputations and products. This event was first held in 1992 at the Hotel de Crillon in Paris, which continues to serve as the venue to this day.

You can find full details of this poster here.

My name is Bill Philpot. I live with my wife, Mo, in Suffolk, UK. We have two grown kids and three grandchildren. I work from home as an artist and Mo teaches craft and is the administrator at Ferriers Barn arts and crafts day centre for physically disabled people at Bures in Suffolk. View all posts by boattripper