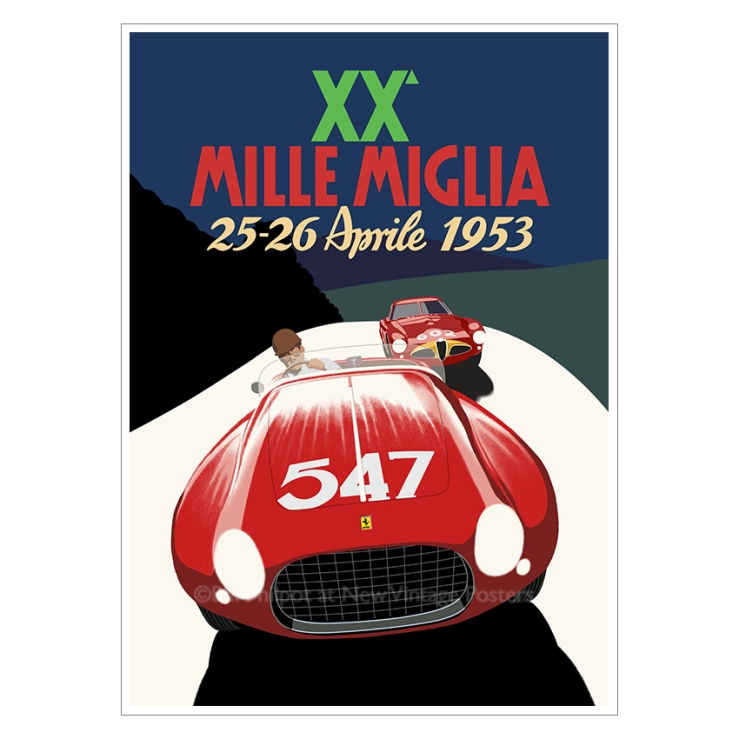 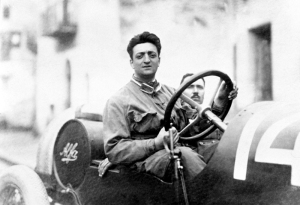 Enzo Ferrari began his motorsport career as a driver with the Alfa Romeo team in 1920 and retired from driving in 1932 following the birth of his son Dino. He would now concentrate on management and the development of his racing team, Scuderia Ferrari, within Alfa. In 1939, after a falling-out with Alfa boss Ugo Gobbato, Ferrari left to build his own factory, but it wasn’t until after the war in 1947 that Enzo formed the racing team that we know today.

The team’s first major victory came in 1949 with the 24 hours of Le Mans race, and further successes quickly followed. But it was always his main aim to defeat the still dominant Alfas. 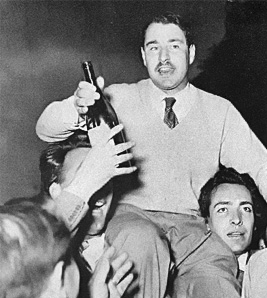 in the high-profile Mille Miglia endurance race, with the Italian driver Giannino Marzotto behind the wheel, to take on the Alfa Romeo 6C 3000 driven by the Argentinian, Juan Fangio. Surviving a couple of crashes during the race and being forced to cut a hole in the bonnet of the car to add oil after the bonnet jammed, Marzotto carried on and eventually overtook Fangio’s crippled Alfa to win the race.

Whenever I formulate a composition for a Mille Miglia poster, I like to place the drama in the open countryside to concentrate on the cars and the headline text, as posters are supposed to do. Many paintings that attempt to recreate the race will feature cars racing through the towns and villages of Northern Italy, but I find this a distraction from the immediacy of my posters. 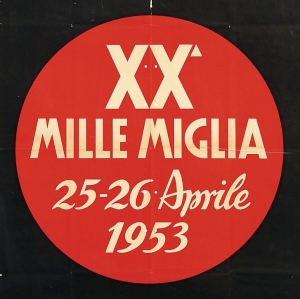 Whilst I would dearly love to claim the full credit for the beautiful design of the headline text in this poster, I need to confess that I redrew it from this image (pictured left), albeit tiny and very low resolution, which I believe appeared on the original programme cover for this event. So at least, I know it is authentic.

You can view this poster in our shop HERE. 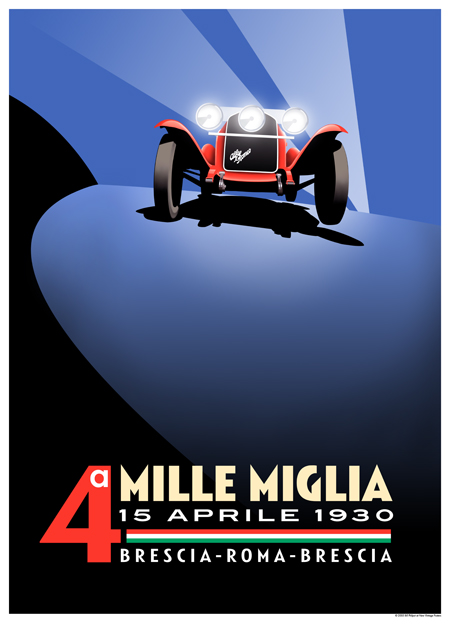 My new website, which I know is built to last and built for speed, is now taking orders at:

Please tell me you love it.

The Le Mans race of 1930 was Bentley’s fourth successive win, and the last in which the company would compete. After catastrophic financial losses following the 1929 Wall Street crash, and the subsequent collapse in the luxury car market, Bentley pulled out of competitive motor racing and under the burden of increasing company debts, sold out to Rolls Royce in 1931. But their brief racing history had been a glorious one.

In the 1930 event Woolf Barnato was seeking his third 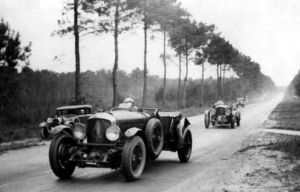 successive win in three starts, (he remains the only driver with a 100% record of wins to starts at Le Mans) this time partnered by Glen Kidston. These men, two of the most notorious of the Bentley Boys, were most remarkable characters. Prodigiously wealthy Barnato was the heir to a fortune gained in the Kimberly diamond mines in South Africa, and an all round sportsman, excelling in just about every sport that took his interest. He won prizes in power-boat racing, was a keen amateur boxer, horseman, athlete and even kept wicket for Surrey cricket club. The 24-hour champagne fuelled parties that he hosted at his country house in Surrey became legendary.

But fast driving at the wheel of a Bentley was his real joy. On one occasion in March 1930 he accepted a bet to race the famous Blue Train from Cannes to Calais, but upped the stakes by saying that he could reach his London club before the train arrived at Calais. Setting off from the bar of The Carlton Hotel at 6pm he arrived at the port of Boulogne in time for the 11.30am sailing to Folkstone and reached The Conservative Club in St James’s at around 3.30pm, 4 minutes before the train arrived at Calais, winning his bet. 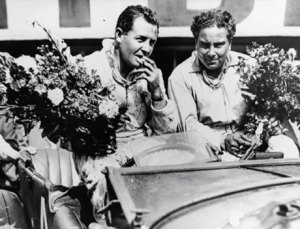 Glen Kidston was possibly even wealthier than Barnato, his riches coming from shipping and banking, and was a born adventurer, narrowly escaping death on several occasions, including motor boat and motor cycle crashes. As a naval officer in the First World War he survived being torpedoed three times, and as a submariner survived running his vessel aground in the North Sea. In 1929 he was the sole survivor when a commercial airliner crashed en route from Croydon to Amsterdam, suffering severe burns. In April 1931 Kidston set off on a record breaking solo flight from Netheravon airfield in Wiltshire to Capetown, South Africa, completing the journey in just 6½ days in his own specially adapted Lockheed Vega monoplane, averaging 131 mph. However, his luck ran out on the return trip when, only a year after his Le Mans triumph, his borrowed de Havilland Puss Moth broke up in mid-air while flying through a dust storm over the Drakensberg mountains, and Glen Kidston was killed.

These two daredevil romantic heroes lived sadly short lives, but packed into those years adventures that us mere mortals can only dream of. Oh, and did I mention that they were both dashingly handsome?

You can find further details of this poster here, and please take a few seconds to share this page with your friends on your chosen social network. Thank you.

I first stumbled upon a picture of this lovely Vittorio Jano designed Alfa Romeo 1750 some years ago in an Italian Alfa Romeo book, and wanted to use the image as reference for a new poster. But I needed some background information about the car’s achievements to feed me ideas how I might build the design, and not being an Italian speaker I looked to the internet. And here I found a wonderful story about the 1930 Mille Miglia event in which the charismatic Italian driver Tazio Nuvolari 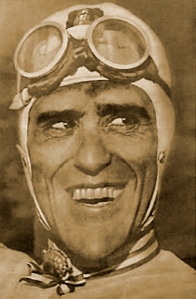 (pictured on the right) cheekily overtook his great rival Achille Varzi, also driving an Alfa, by sneaking up in the dark with his headlights turned off, only turning them back on after he had passed Varzi. Of course, I couldn’t resist using this excellent yarn as the basis for my design, despite the fact that eyebrows are raised among the cognoscenti as to the accuracy of this version of events. But why let the facts get in the way of a good story?

The Coppa delle Mille Miglia is run over a figure of eight course starting out from Brescia to Rome and back to Brescia; a distance, as the name suggests, of close to a thousand miles. And after sixteen hours of racing Nuvolari beat Varzi by seven minutes to win the race.

This particular poster has been my most popular design by a considerable distance and is still selling well. If you’d like further details of this and other posters in my collection you can find them here.