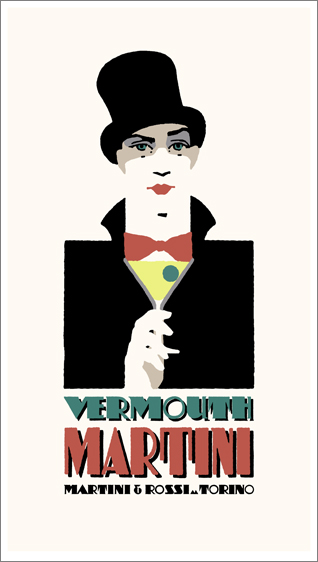 This Martini poster, one of a pair (see the Martini girl here), features a male character in formal dress, top hat worn at a rakish angle, and a pierrot’s white face staring out of the picture. The influence for this motif is the Commedia Dell’Arte figure of the unworldly clown who loses his innocence. Commedia dell’Arte was a humorous theatrical presentation performed by professional players

who travelled in troupes throughout Italy in the sixteenth and seventeenth century. But the popularity of the commedia began to fade in the eighteenth century until a revival of interest was sparked in the early part of the twentieth century by the paintings of Cezanne (‘Le Clown’ shown on the left) and Picasso, and the music of Stravinsky (Pulcinella) and Schoenberg (Pierrot Lunaire). The latter tells the story of an innocent, moonstruck Pierrot who becomes sexually educated at the hands of a servant girl, Columbine, the situation being orchestrated by a domineering Brighella.

(On the right is a scene from Glen Tetley’s 1962 ballet ‘Pierrot Lunaire’  performed by The Royal Ballet Company.)

The art deco movement was also quick to pick up on this revival and soon it became extremely influential in the designs of the period.

My Martini man is that same pale-faced Pierrot after the fall, dressed to kill and wearing a very confident, knowing expression as he sips his Martini, all the time gazing unerringly into the viewer’s eyes.

The lettering, as in the Martini girl poster, is hand drawn based on designs by the brilliant Dutch typographic artist of the early 1920s, Antoon Kurvers. Further details of this and other posters in my collection can be found here.

My name is Bill Philpot. I live with my wife, Mo, in Suffolk, UK. We have two grown kids and three grandchildren. I work from home as an artist and Mo teaches craft and is the administrator at Ferriers Barn arts and crafts day centre for physically disabled people at Bures in Suffolk. View all posts by boattripper